There have been many occasions when a trio of great players clicked together to take their status to legendary heights. So here we look into the annals of footballing history for the 10 best football trios. 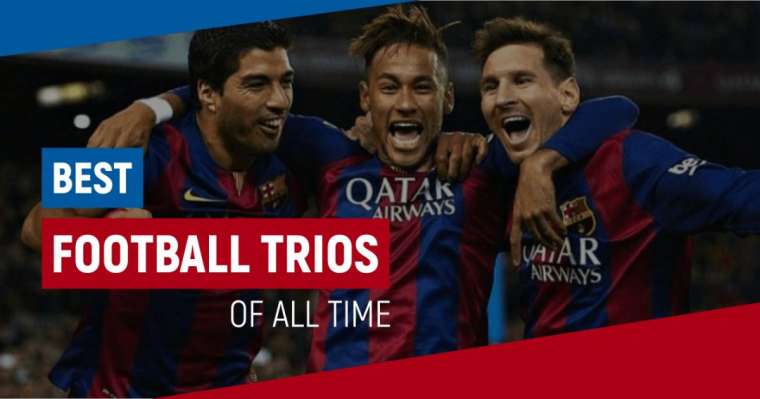 Ever since Neymar, Messi, and Suarez last came together to form the front three of Barcelona and put on one awesome performance after another, many people asked questions. If they are the best football trios of all time? Read on and find out! 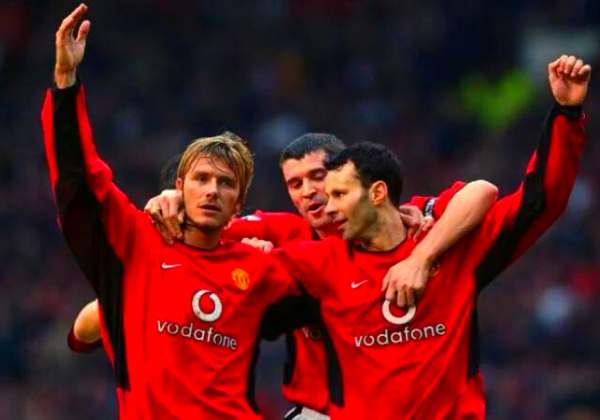 At number 10 in the best football trios is Beckham, Giggs, and Scholes for Manchester United.  These three are inspirational soccer trio for the world and also among the greatest soccer players of all time.

Giggs and Scholes both were the product of Manchester United. These three were the hardest-working players of the club, with many stories of their Spartan training.

These three together formed the midfield backbone of their team, creating chances for the strikers while scoring themselves sometimes as well.

Beckham was the more flamboyant and prolific scorer of the three. That was because of his precision with free kicks and the ability to score goals from long shots. 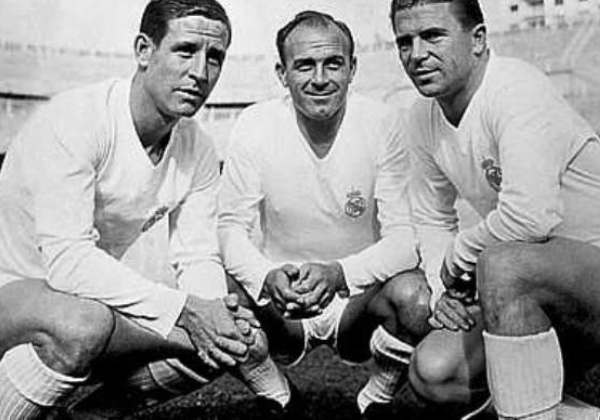 At number 9 in best football trios are Alfredo Di Stefano, Francisco Gento, and Ferenc Puskas for Real Madrid. The original greatest soccer trio for Real Madrid before Bale, Ronaldo, and Benzema came along.

These three were the reason for Real Madrid’s dominance in the 1950s and for establishing Real Madrid as one of the most valuable sports clubs in the world.

Together they won three European Cups, while Gento, even to this day, remains the only player to win six European Cups.

The jewel of this trio, Alfredo Di Stefano, is also one of the highest scorers in the UEFA Champions League.

At number 8 in the best football trios is Messi, Xavi, and Iniesta for Barcelona. The best trio in soccer history, they were the epitome of footballing magic in the modern era.

The great vision and passing ability of the three came together perfectly in the tiki-taka philosophy of Pep to create one of the most dominating teams in club history.

Together this trio has won four Champions League and six La Liga titles. A lot of Barcelona’s success and Messi’s own scoring record can be partly attributed to the best midfielders of 2016, Xavi and Iniesta.

These two seemed to play with some sort of telepathic communication as they tore the opposing defense with their lightning-fast string of short passes to set Messi up for a goal. 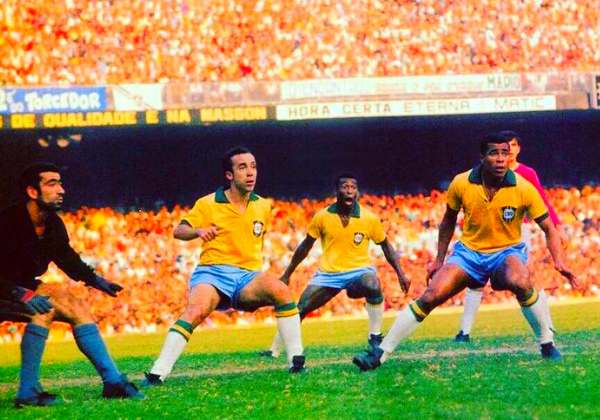 At number 7 in the best football trios is Pele, Jairzinho, and Tostao for Brazil. Brazil had one of the best teams of all time in the ’70s.

That can be attributed to the fact that the front five of their team were good enough to wear the No 10 jersey of any team. But it was this trio that made it the world-beater team it was.

They set the 1970 World Cup on fire with their scintillating performances.

Jairzinho scored in every match while Pele cemented his position as the greatest of all time and this trio became one of the best trios in soccer history. 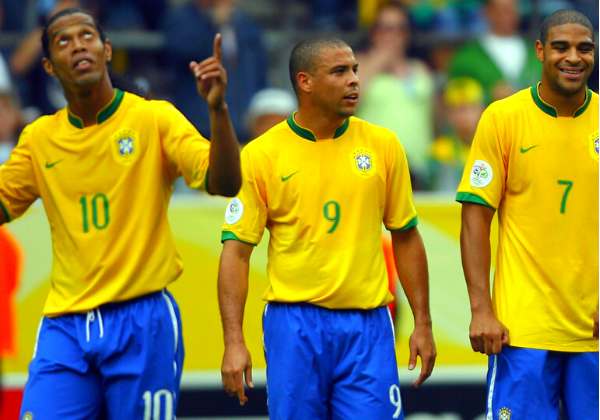 At number 6, we have Rivaldo, Ronaldo, and Ronaldinho for Brazil. This power trio in soccer needs no introduction. One of the most exciting trios of modern times, each of them could dribble, set up plays for the others, and finish perfectly.

This made them especially deadly as the defense had a tough time deciding whom to mark. The trio won the 2002 World Cup together and showed just how dangerous the Brazilian style of football could be.

They have also created some of the special moments in football world cups. Each of them was the greatest player in their generation. 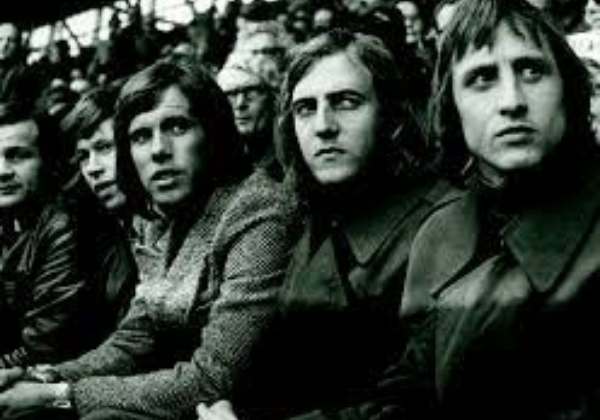 At number 5 in best football trios is Johan Cruyff, Johnny Pep, and Piet Keizer for Ajax. Dutch has produced some of the finest footballers of all time, but this particular trio was something else.

These three were the most instrumental in the Total Football mechanism of the ’70s that became famous worldwide due to Ajax and the Dutch National Side.

These three were the reason for the Netherlands reaching the final of the 1974 World Cup, but it was Ajax where they truly shined.

This trio led Ajax to three back-to-back European Cups and started the golden age of Ajax. No surprise that they are remembered as one of the greatest football trios to date. 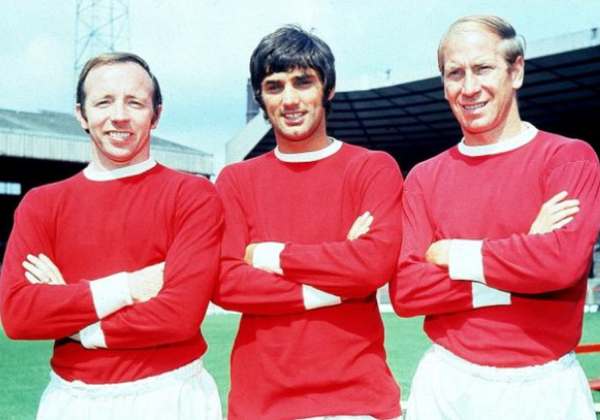 At number 4, we have George Best, Dennis Law, and Bobby Charlton for Manchester United. You know a trio is one of the best trios in soccer history when each of them has won and secured their special place in the history of the Ballon d’Or.

They helped Manchester United to become the first English club to win the European Cup in 1968.

They were literally unstoppable in their times and have scored more than 660 goals in 1300 matches together.

At number 3 in the best football trios are Messi, Suarez, and Neymar for Barcelona. This trio, comprised of the best players of their respective Latin American countries, is not only one of the current best trios but also among the greatest trio in football.

They have set a new benchmark for the scoring stats of the trio, as these three combined scored more than the entire Real Madrid team in 2015.

Comprising one of the most handsome soccer players of all time in Messi, the deadliest striker of 2023 in Suarez, and a player already considered by many as one of the best natural talents of all time in Neymar, they will only get better with time. 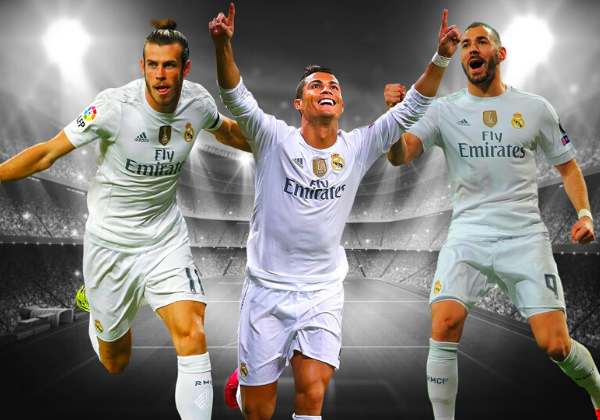 At number 2 is Gareth Bale, Benzema, and the richest soccer player, Christiano Ronaldo, for La Liga side Real Madrid. One of the best threes in soccer, they have redefined the counter-attacking football of Real Madrid.

This trio might as well be the most expensive soccer players trio on the list, they often have a lot of hate for not being creative enough.

But no one can question their success as these three have won five Champions League and two Copa Del Rays together. 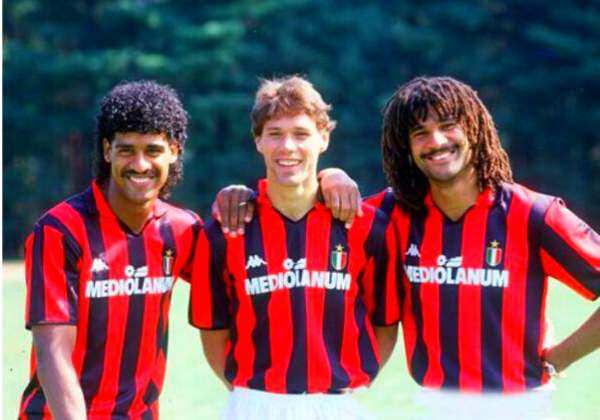 At number 1 in best football trios is Van Basten, Gullit, and Rijkaard for AC Milan. These three were the perfect example of how good signings can change the tides for a club.

When AC Milan signed these three, they went on to win three league titles, two UEFA Champions League, and two European Supercups. They even enjoyed a 58-game unbeaten streak.

Van Basten was, at this time, one of the most clinical finishers in the game. Rijkaard was one of the best defensive midfielders, while Gullit was the best No. 10 in the Netherlands.

No wonder players of such extraordinary individual caliber formed one of the greatest trios of all time.

What makes these players among the best football trios in the world is their ability to entertain fans worldwide. They have the capability to connect and communicate well and give some fine performances together. Who are your favorites?

Q. Was MSN the best trio?

The greatest footballing trio of all time is completely split with Luis Suarez leaving Barcelona for Atletico Madrid. During His time as a member of ‘MSN’, the Uruguayan, Neymar, and Lionel Messi were stunningly brilliant.

Q. What is the BBC trio?

It looks like Real Madrid could re-unite their famed “BBC” trio this summer as Cristiano Ronaldo and Gareth Bale plan to rejoin Karim Benzema at the club. Benzema, Ronaldo, and Bale first came together in 2013 when Bale signed for the then world-record transfer to Santiago Bernabeu.

Q. How many goals did Messi, Neymar, and Suarez score?

Since Messi and Neymar joined Luis Suarez at Barcelona at the beginning of the 2014/15 season, the trio has scored an incredible 270 goals between them. That’s more than double the amount Premier League Champions Leicester has scored during the same period!

Q. How many years was MSN together?

This concludes a partnership that dominated La Liga for six years. Before it was just Messi and Suarez, they had Neymar as well. Known as ‘MSN’ by supporters, the trio achieved great things together.