These hockey-playing ladies are set to blow your mind tonight. So, grab on to that seat as we take you through the top 10 best-looking female hockey players 2023. 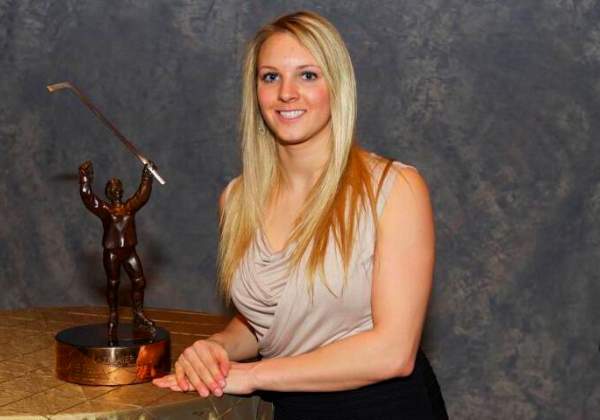 If you’re not familiar with the world of the U.S. ladies’ national squad, NHL star Phil Kessel’s little was, until recently, one of their topmost forwards.

She recently chose to retire from hockey while playing for the University of Minnesota Golden Gophers due to some concerns over concussions.

She got hit hard during the Sochi Olympics and became really concerned that she would suffer serious health problems if she were to continue any further play and risk another serious blow to the head.

Moving away from the dire health issues and back to the theme of this article, while her brother somehow looks like he binges on cheeseburgers (sorry, Phil), Amanda is a complete Wisconsinite fox. She is undoubtedly one of the hottest female ice hockey players. 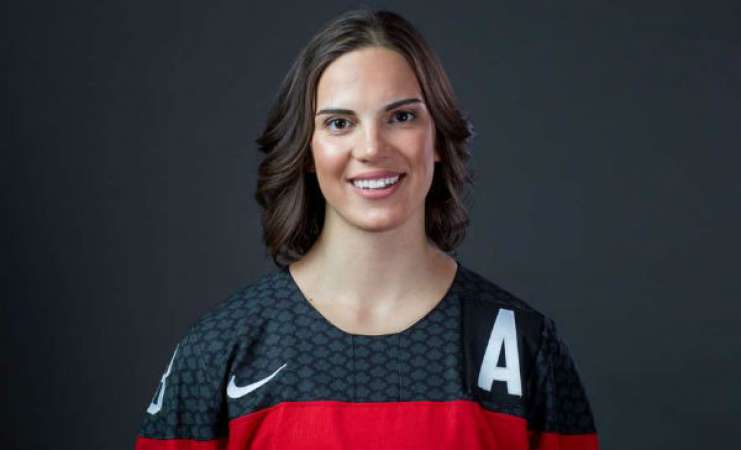 Hailing from beautiful Brandon, Manitoba, Canada, Halli, “Don’t try to pronounce my last name” Krzyzaniak appears to be one of the loveliest gems on the Canadian women’s national hockey team as of now.

The defense woman became really skilled at the game because while it’s a delightful place to live, there isn’t really much else to do in Brandon, Manitoba.

She won gold playing with the Canadian under-18 team in 2012 and, since 2013, has been playing for the University of North Dakota. 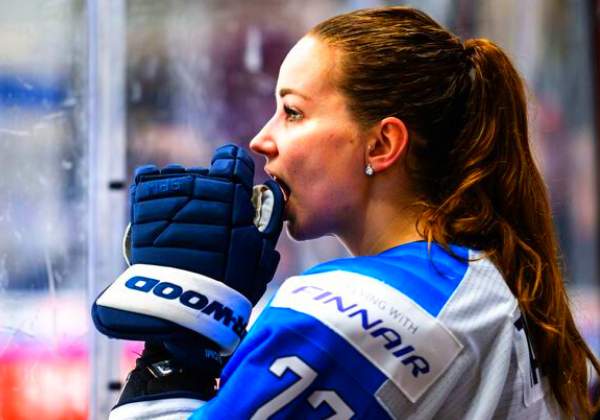 She currently plays for HPK in the women’s league in Finland. Left-winger Susanna Tapani has also credibly won two bronze medals with the Finnish women’s national sides at the 2011 and 2015 World Championships.

She played in the 2014 Sochi Olympics and, for a brief duration, played for the University of North Dakota.

Aside from being good at hockey, she’s really beautiful and plays one of the most dangerous sports, ringette, when the ice melts. 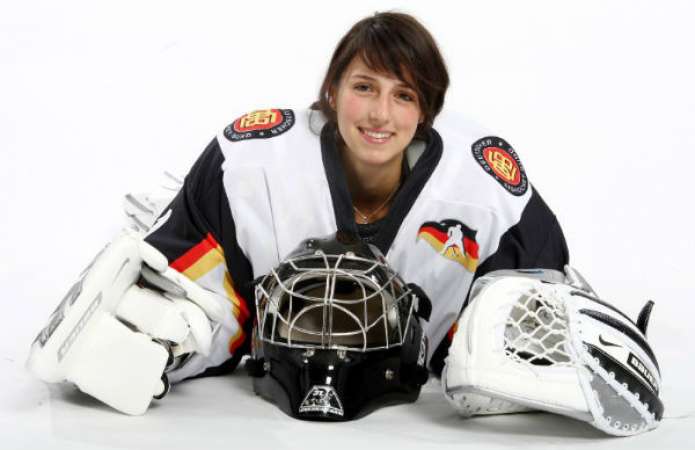 Houston, we have a cutie here. Actually, let every city know about this. German goalie Viona Harrer looks totally like the kind of girl you see at a bar sipping a beer just a few tables over who starts giggling when you inadvertently make eye contact with her.

She has played not only for the women’s national squad but also played in a professional men’s league. Without any doubt, she is one of the hottest female ice hockey players in 2023. 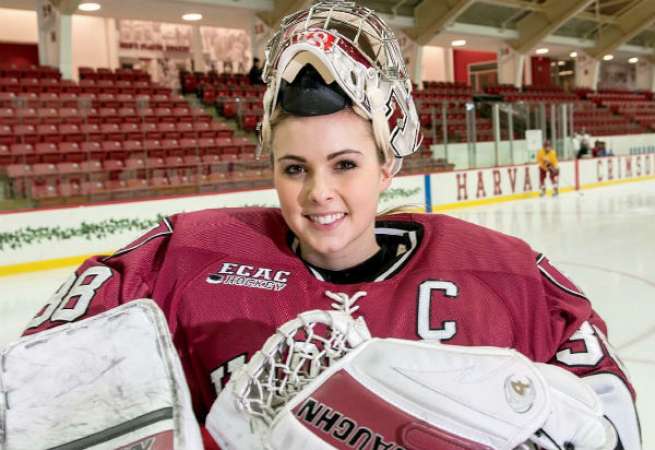 At number 6 in the list of top 10 best-looking female hockey players 2023, there is Emerance Maschmeyer.

She is considered one of the hottest goalies of her time and is amazing at what she does. Her goalkeeping skills land her in the 6th spot on this list. 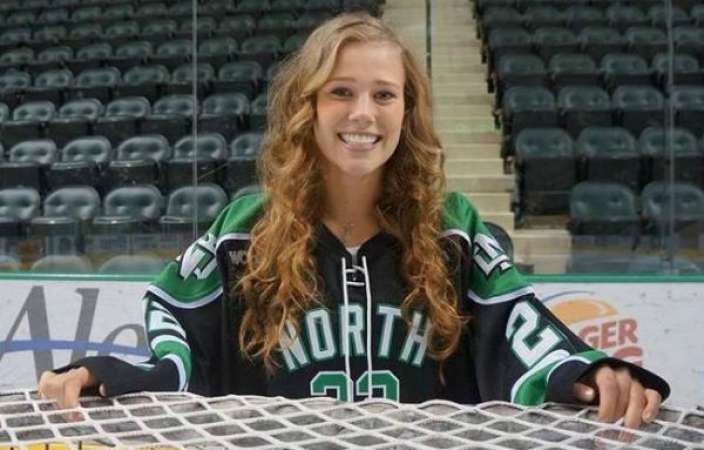 Number 5 on the top 10 best-looking female hockey players 2023 is a gorgeous blonde from Kaufbeuren, Germany; 22-year-old Eisenschmid has been a popular member of the national team since 2013.

Like our next beautiful entry on this quite flawless list, she plays for the University of North Dakota women’s hockey squad. She hasn’t won any medals with her National Team yet, but she’s indeed won a valuable spot on this list. 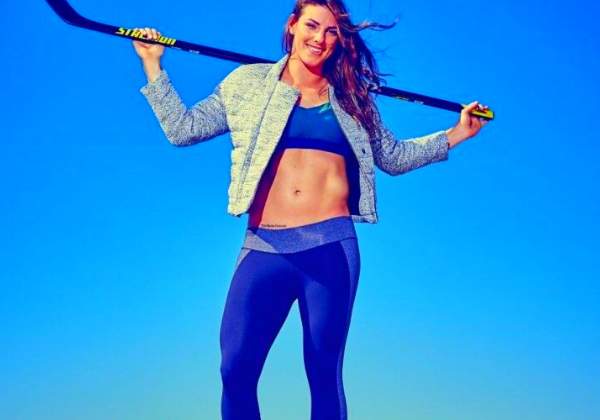 I’ll apologize to all Americans that your top hottie is not to be the number one in the list of top 10 best-looking female hockey players 2023.

She’s close, and if this were an article about the hottest female hockey players in 2023 in the world, she’d probably be the decisive number one.

With five World Championship golds to her name since 2008 and two silver medals in the years 2010 and 2014 Olympics, Hilary Knight has been one of the most remarkable of the past decade.

Not only is she absurdly skilled, though, she, like so many others on this list, is hot enough to make some models insanely jealous. 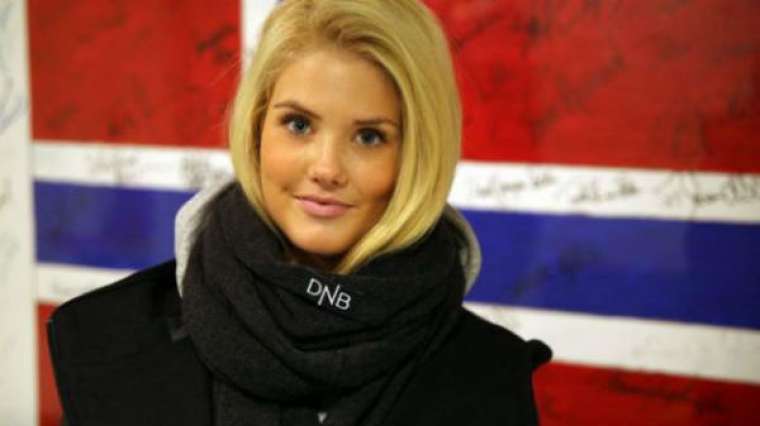 Number 3 on the list of top 10 best-looking female hockey players 2023 is a twenty-one-year-old Moscow native who has played in the defense for the Russian national team at two World Championships and an Olympics and has rightfully claimed our number three spot and our hearts.

Besides, she currently plays for Moscow’s team in the Russian Women’s Hockey League.

She won a bronze medal with the national team back in 2013 at the World Championship. But she did not really register a point in that tournament. Standing 5’10, she has a great pair of legs to brilliantly match her striking eyes. 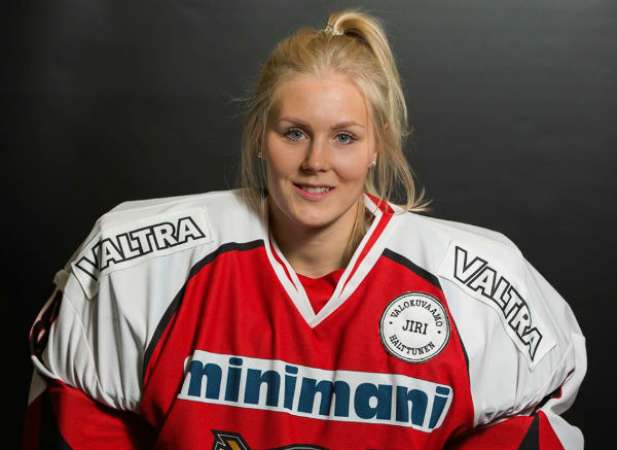 Another gem of a player in the top 10 best-looking female hockey players 2023 is Meeri, who has played goalie for the Finnish national side and is our number two. She, like the other Fins on this list, is a testament to the cliché stereotype that all Scandinavian women are blonde bombshells.

I’ll spoil number one for you right now; by the way, she happens to be another goalie. 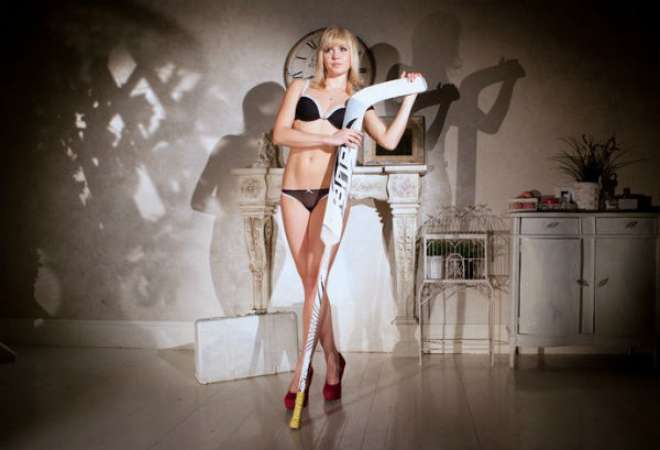 There was never a real contest for the number one here. The rest of the list are hotties, but Russian goalie Anna Prugova is so obscenely and incredibly beautiful that she is a full step above the rest. She started playing early for the Russian national team back in 2010.

And she has been dropping jaws ever since she appeared. No matter what body part you’re most fond of, she’s flawlessly perfect, with a stunning face and all the rest. Back in 2010, she used to be the youngest woman in the Olympic women’s hockey tournament.

These best-looking female hockey players are not only good at looking, but they are also superb at playing Hockey. So it won’t be wrong to call them ‘Beauty With Brains.’

Q. Who is the best female hockey player?

Hayley Wickenheiser is considered to be the greatest female ice hockey player of all time. In addition to his four Olympic gold medals, Wickenheiser holds the Canadian record for most international goals (168), assists (211), and points (379).

Q. Has there ever been a female in the NHL?

Manon Rheaume became the first female NHL player in 1992 when she played for the Tampa Bay Lightning in an exhibition game against the St. Louis Blues. The Arizona Coyotes hired Dawn Braid as their skating coach in 2016, making her the first female full-time coach in the NHL.

Q. How many female hockey players are in the Hockey Hall of Fame?

Winners and honorees are announced and honored at different times. Foster Hewitt, a builder, is the only media honoree inducted into the Hall in his own right. Hockey Hall of Fame inductees include 289 players (eight of whom are women), 112 builders, and 16 on-ice officials by 2020.

Q. Why is there no checking in women’s hockey?

Since these hits are dangerous and likely to cause serious injury, they can be penalized from a minor two-minute penalty to a major and a game misconduct. Anybody checking in women’s ice hockey is a penalty, and it is also not allowed in leagues with young children.