Legendary Italian referee Pierluigi Collina is surely the greatest football referee of all time. He is the only official to win the prestigious “FIFA Referee of The Year” award a record six times consecutively. Besides, he also officiated many great games, such as the 2002 FIFA World Cup Final and the 1999 UEFA Champions League Final. German referee Markus Merk and English referee Howard Webb also deserve their mentions among the best football referees of all time.

Best football referees are trained in national camps affiliated with FIFA, and each national organization recommends its top officials to FIFA for their final FIFA International Referees List. The yellow and red colored cards carried by the referee were introduced by former FIFA Referees’ Committee member Ken Aston and were first used at the 1970 FIFA World Cup in Mexico.

FIFA allows referees to wear jerseys among the five colors, which are black, red, yellow, green, and blue, but referees are required to wear black shorts and black socks during any game.

Referees were first described in football by Richard Mulcaster in 1581, and since then, they have played a vital role in any match. So, the Sports Show team compiled a list of the top 10 best football referees in history. 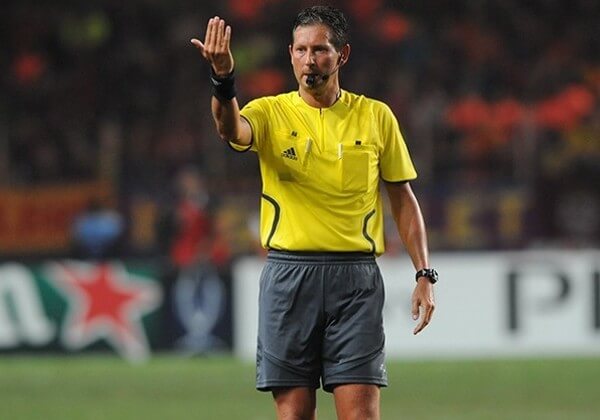 Frank de Bleeckere became the Belgian Professional Referee of the Year for a record seven times. And he achieved that feat from 2000 to 2013. He made his debut in 1984 and worked as a FIFA-affiliated referee from 1998 to 2012.

He made his name as the only referee from Belgium to officiate in 7 world cup matches. Bleeckere officiated matches in the 2006 FIFA World Cup and 2010 FIFA World Cup. He also served as one of the 16 “Refereeing Technical Advisors” of FIFA in 2012. 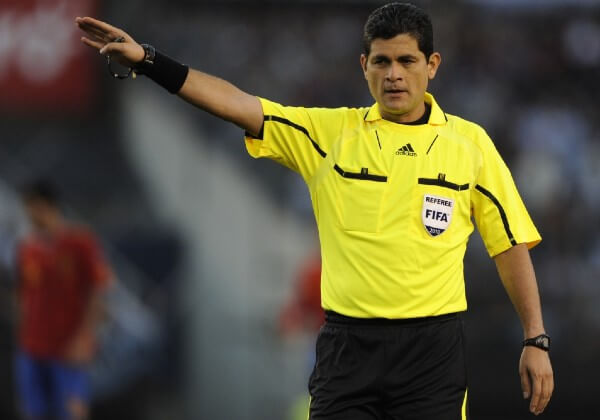 Retired Colombian football referee Oscar Ruiz Acosta made his name as the best Colombian referee of all time. He worked as a FIFA-affiliated referee from 1995 to 2011.

Acosta now works as a member of the FIFA referee instructor team. He debuted internationally on 12 July 1995 in a match between Paraguay vs. Venezuela. He also officiated in three consecutive world cups starting from the 2002 FIFA World Cup to the 2010 FIFA World Cup.

Ruiz received severe criticism after he sent off Yoann Gourcuff in the final group-stage match between France and South Africa.

After his retirement from active refereeing, he served his terms as a member of CONMEBOL’s referee assistance program. Besides his football career, he is also a lawyer by profession. 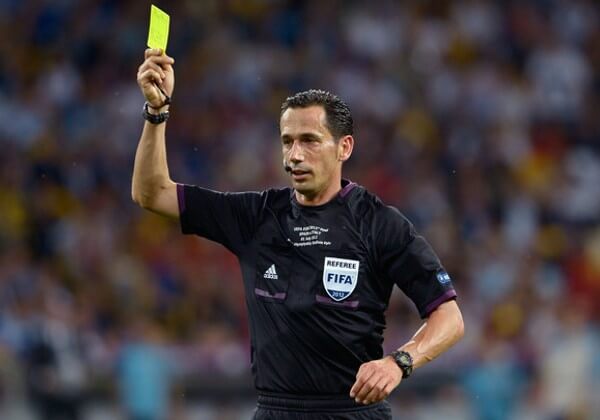 Portuguese football referee Pedro Proença made his name the best referee of modern times. He still now officiates international football. He became the first referee to officiate both the finals of the UEFA Champions League and the UEFA European Championship in the same calendar year.

Proenca became a FIFA-affiliated referee in 2003 and was also listed in the UEFA’s Elite category in 2009. He received the Best Referee of The Year award in 2007 and 2011 from the Portuguese Football Federation.

IFFHS also named him the World’s Best Referee in 2012. Besides his international achievements, he also officiated many vital club matches. 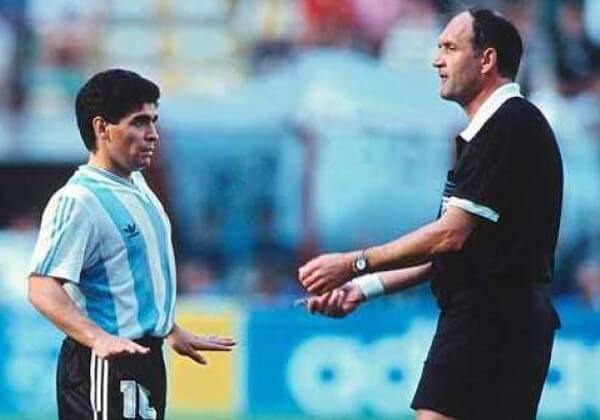 Retired French football referee Michel Vautrot is considered one of the best referees from France. But he made a hilarious funny decision at the 1990 FIFA World Cup. He added 8 minutes of stoppage time in the semifinal between Italy and Argentina. Later, he stated that he forgot to check his watch.

Besides his international career, Vautrot also refereed matches in three European Championships from 1984 to 1988. He then also conducted the 1986 Euro Cup Final between FC Barcelona and FC Steaua Bucharest.

IFFHS named him as the World’s Best Referee twice consecutively. He received huge criticism after FIFA banned FC Roma for bribing him with £50,000. One of the richest football clubs, Roma, did that prior to the 1986 European Cup semi-final. 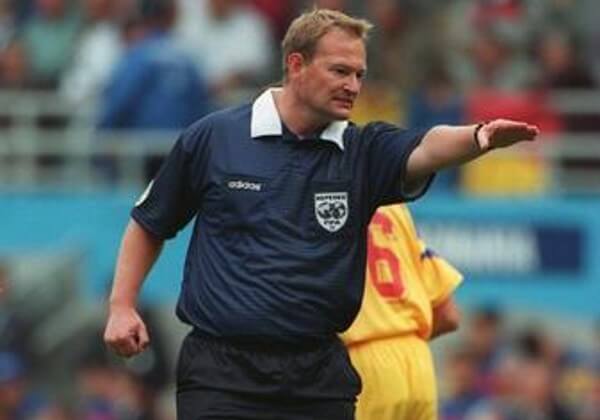 Danish former football referee Peter Mikkelsen is often regarded as the pioneer of great Danish refereeing. He worked as the FIFA affiliated referee during his heydays. Mikkelsen officiated two matches at the 1990 FIFA World Cup in Italy at the age of just 30.

He again officiated in three matches at the 1994 FIFA World Cup in the USA. Besides international football, Mikkelsen also refereed matches at UEFA European Football Championship tournaments in 1992 and in 1996.

The International Federation of Football History and Statistics named Mikkelsen the World’s Best Referee in 1991 and 1993. He declared his retirement from active refereeing after the 1998 FIFA World Cup Qualifiers.

Besides his referring career, he also served his duty in the Human Resources department of the Danish company F-Group for 10 years. And after a long battle with cancer, this referee died on 30th January 2019. 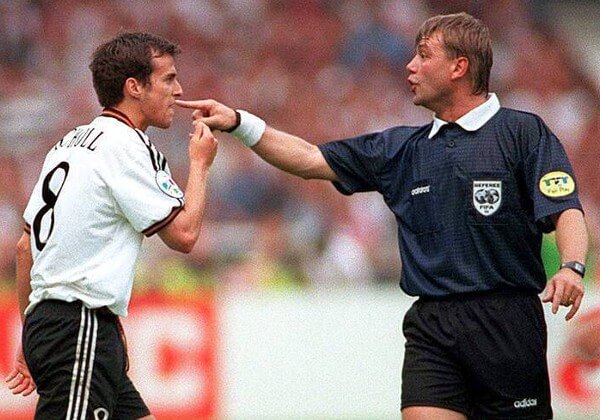 Retired Hungarian football referee Sandor Puhl is widely considered among the top referees in soccer history, but sadly, he is a highly criticized figure in Spain due to his negligence at the 1994 World Cup quarter-final between Italy and Spain, where Mauro Tassotti elbowed Luis Enrique on the face in the penalty box during injury time where the impact broke Enrique’s nose.

FIFA also heavily criticized his negligence of not giving a penalty or card in that match and later suspended him for eight international matches.

He became famous as the referee of the 1994 FIFA World Cup final between Brazil and Italy. IFFHS named him as the World’s Best Referee of the year four times consecutively from 1994 to 1997.

Besides refereeing, he also served as the Deputy Chairman of the Hungarian Football Association from 2000 to 2006. 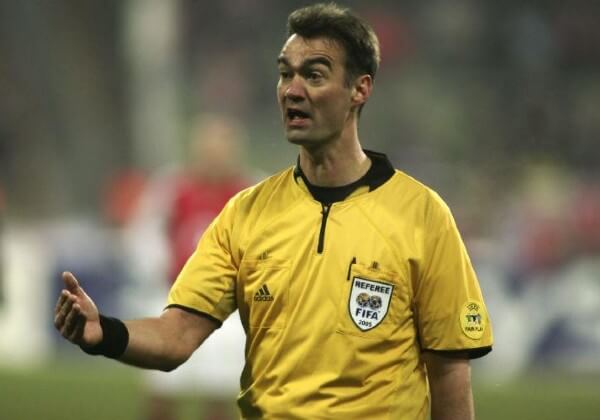 Danish former football referee Kim Milton Nielsen was famous for his distinctive 6 feet 6 inches tall look as he was taller than most international football players. He had officiated 154 internationals and 53 UEFA Champions League matches during his career.

He first became a FIFA-affiliated referee in 1988 at the age of just 28. And he served his duty until his retirement on 16th May 2006 after reaching the UEFA-regulated age limit of 45. 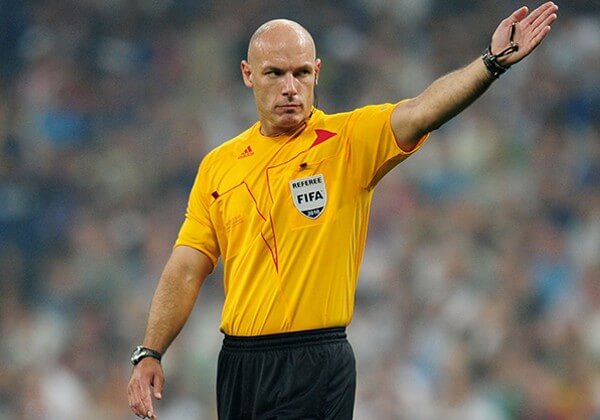 English former football referee Howard Webb recently declared his retirement from active refereeing on 6 August 2014 in order to serve as the Technical Director of the Professional Game Match Officials Board.

He served as a FIFA-listed referee from 2005 to 2014 and also officiated in Premier League matches from 2003 until his recent retirement. In 2010, he served as the referee of the UEFA Champions League Final and FIFA World Cup Final and became the first referee to do so in a single calendar year.

Webb also officiated in many FA Cup finals, FA Community Shield finals, and the Football League Cup finals. He was named FIFA’s Best Referee of the Year in 2010 and also received 2011 New Year Honors for his contribution to football.

Before he turned towards his refereeing career, he was a sergeant in the South Yorkshire Police.

He received FIFA’s “Best Referee of the Year” award three times and DFB German Referee of the Year a record six times. He debuted as the youngest Bundesliga referee ever in 1988 at the age of just 25. Merk also officiated football matches at the 1992 Barcelona Olympics.

He served his terms as a FIFA-listed referee starting from the 1993 World Cup qualifier until his retirement after the match between Bayern München and Hertha BSC Berlin on the last day of the Bundesliga 2008 season.

He is currently the main referee commentator of the Turkish channel Lig TV covering the Turkish Super League. Besides his refereeing career, he is also a professional dentist. 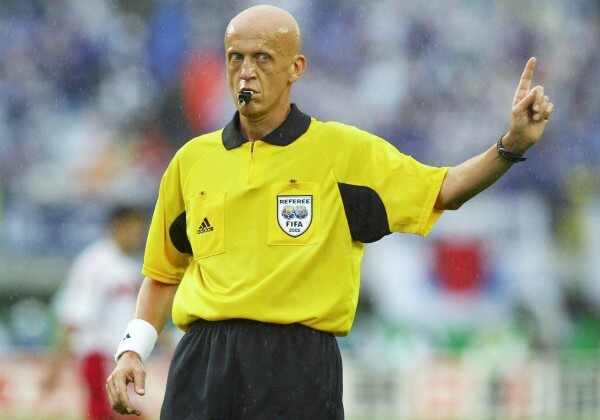 Italian former football referee Pierluigi Collina served his terms as a FIFA-listed referee from 1995 to 2005. He was named FIFA’s “Best Referee of the Year” a record six consecutive times and is widely regarded as the best referee in international football history.

Collina is a current member of the UEFA Referees Committee and has also served his duty as a Chief of the Football Federation of Ukraine since July 5, 2010. He persuaded his referee’s course way back in 1977.

Collina has earned his nickname ‘Kojak’ for his distinctive bald look because of alopecia. After he officiated in 43 Series A matches, he was inducted into FIFA’s Referees List in 1995.

Some of the best matches that he officiated were the 2002 FIFA World Cup Final between Brazil and Germany and the 1999 UEFA Champions League Final between Bayern Munich and Manchester United.

International Federation of Football History and Statistics inaugurated their World’s Referee of the Year award way back in 1987, and Brazilian referee Romualdo Filho was the first referee to be apprised of the honor. Other notable mentions as the best referees of all time are José Robert Wright, Viktor Kassaï, Cüneyt Cakir, and Bjorn Kuipers.

So, this was our pick of the top 10 best football referees of all time.

Q. What are the different referees in football?

There are a variety of titles for the various positions of football officials, but they are commonly referred to as referees. Referees and Linesmen are among them.

Q. How many referees are there in football?

Officials are responsible for enforcing the rules and keeping the game in order in football. In professional and most college football games, there are three officials on the field, one referee and two linesmen, who play vital roles in the game.

Q. How much do football referees make?

Q. How much do college soccer referees make per game?

Depending on the size of the team, referees can earn up to $50 per game. According to the MLS, the most high-paid referees get $6,354 per game, and referees in Spain get $900 per game. Nevertheless, they earn a handsome amount of money.