The game of pool, which is formally known as pocket billiards mainly in North America or even as pool billiards mostly in Australia and Europe, is one of the most stylish and sophisticated indoor games in the world. It belongs to the family of cue sports and games. And some of the best pool players earn not only fame but also a huge chunk of money.

Played on a pool table with six receptacles or pockets along the rails, this game has some popular versions, such as eight-ball and nine-ball.

Six-pocket, on the other hand, is an obsolete version. In fact, there are hundreds of pool games, some of which are formed by hybridizing aspects of pool and carom billiards. Here is a list of the best pool players of all time. Let’s take a look at their achievements.

American professional pool player Ronnie Monroe “Fast Eddie” Allen was regarded as a pool “superstar” in the prime of his pool-shooting career. He is noted as a “one pocket specialist” and is inducted in the tenth place in our list of the top 10 best pool players of all time.

And legendary Minnesota Fats said of Ronnie Allen that “Anybody who plays him for money ain’t got no chance at all.” For his immense contribution to the pocket billiard game of one pocket, Fast Eddie was inducted into the One Pocket Hall of Fame in 2004.

American professional pool player Cecil P. “Buddy” Hall was heralded as a “living pool legend” by The International Pool Tour and is the ninth place inductee in our list of best pool players of all time. He is nicknamed “The Rifleman” for his amazing accuracy and was one of the most dominant forces in the pool for nearly three decades.

Buddy is also noted for creating the “clock system,” which is “a technique for where to hit the cue ball, using the clock as a mechanism for where to aim,” according to PoolVideo.com.

He was named Player of the Year by The National Billiard News and Pool and Billiards Magazine three times and is currently a member of the International Pool Tour. Buddy Hall was inducted into the Billiards Congress of America’s Hall of Fame in 2005.

American professional pool player Johnny Archer was ranked third in the “Fans’ top 20 favorite pool players” poll by the Pool & Billiard Magazine in 2007 and is the eighth place inductee in our list of greatest pool players of all time.

He is nicknamed “the Scorpion” as one of his sponsors is Scorpion Cues and also because his zodiac sign is Scorpio. He has been one of the most successful nine-ball players in the last two decades.

Archer won the WPA World Nine-ball Championship two times, in 1992 and 1997. He won the Sudden Death Seven-ball and the first World Summit of Pool in 2003. He also achieved the $50,000-winner-take-all International Challenge of Champions in 2006. Archer achieved his place in the Billiard Congress of America Hall of Fame on June 8, 2009. 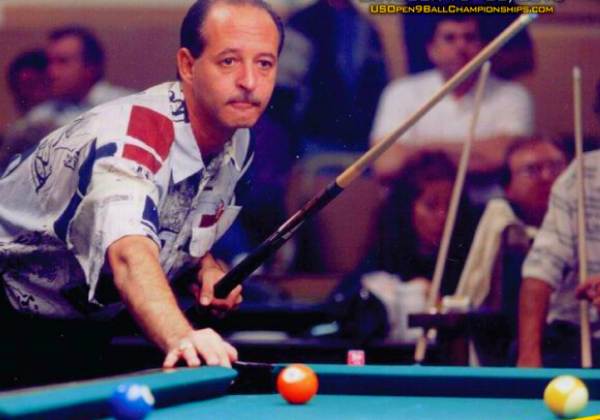 American professional pool player Mike Sigel has won over 102 major pool tournaments in his active career and is the 7th place holder in our list of best pool players of all time. Fans nicknamed him “Captain Hook for his ability to use safety plays to hook his opponents.

Sigel achieved the title of US Open Nine-ball Championship three times and won the world pocket billiard championship five times. He was named “Player of the Year” by Billiards Digest and Pool and Billiards three times till now.

He became the youngest player ever to earn his place in the Billiard Congress of America Hall of Fame at the age of 35 in 1989. Sigel was placed in the fifth position in the list of “50 greatest pool players of the Century” by Billiards Digest. He also earned his place in the International Jewish Sports Hall of Fame in 2011. 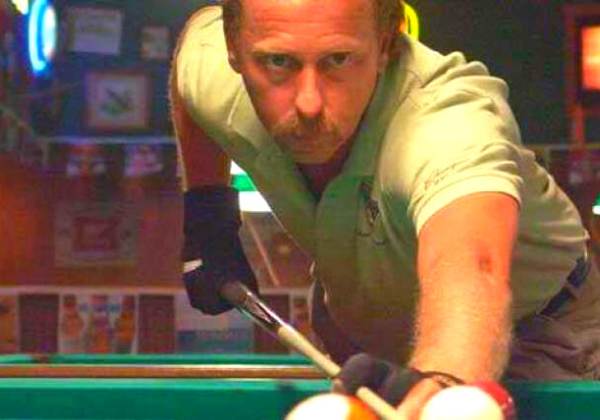 American professional pool player Earl Strickland, nicknamed “The Pearl”, is widely considered by many as one of the best nine-ball players of all time and is the 6th place inductee in our list of best pool players of all time. Besides his numerous championship titles, Earl also became famous as one of the most controversial players for his outspoken views and volatile behavior.

He earned his place in the Billiard Congress of America’s Hall of Fame in 2006. Earl Strickland is ranked sixth in the “Fans’ top 20  pool favorite players” poll by the Pool & Billiard Magazine in 2007.

5. Luther Lassiter | The Wizard Of Nine-Ball

World-renowned American pool player Luther Lassiter, nicknamed Wimpy, is still recalled by Pool fans for his wizardry in the game of nine-ball. He now holds the fifth place in our list of best pool players of all time.

Luther Lassiter secured the 9th spot on the list of “50 Greatest Players of the Century” by Billiards Digest. He was noted as the undisputed king of the pool hustlers in his heyday and won over $300,000 from gambling on pool games between 1942 and 1948. Luther Lassiter won $15,000 in a single week, which made him a folk hero in his own country.

American professional pocket billiards player Rudolf Walter Wanderone, famously known as “Minnesota Fats,” became the most publicly recognized pool player in the United States during his heydays. He became famous not only as an amazing pool player but also as a complete entertainer.

And now, he holds the fourth place in our list of best pool players of all time. He started playing pool at a very young age and became a traveling pool hustler in his teenage days. Minnesota Fats hustled servicemen in Norfolk during World War II and eventually became a folk superstar.

Rudolf earned his nickname ‘Minnesota Fats’ from a character in the 1961 film The Hustler. However, film critics claim that the character was solely based on him. He earned his place in the Billiard Congress of America Hall of Fame in 1984. Rudolf has achieved his nomination for popularizing the pool game all over America. 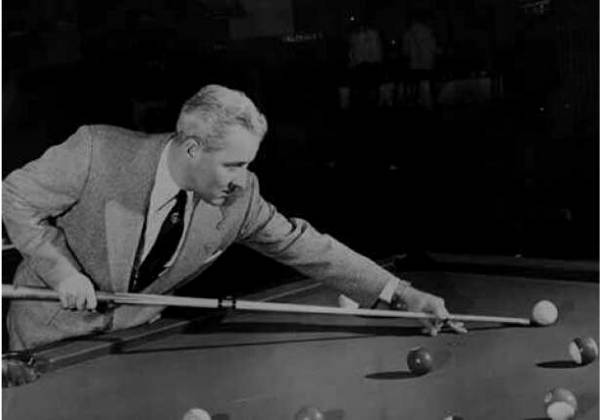 American professional pool and pocket billiards player William Joseph Mosconi holds the third place in our list of best pool players of all time. He won the World Straight Pool Championship an unmatched fifteen times between 1941 and 1957.

He earned his nickname “Mr. Pocket Billiards” after he pioneered and employed numerous trick shots. His name became almost synonymous with pool in North America. Besides, he also made contributions to popularizing the pool as a national recreation activity.

Mosconi holds the world record of an officially recognized straight pool high run of 526 consecutive balls. He became one of the first three inaugural inductees in the Billiard Congress of America’s Hall of Fame in 1966. Mosconi also worked as the technical advisor of the Paul Newman starring 1961 film The Hustler. That film played a leading role in the boom in the popularity of the pool. 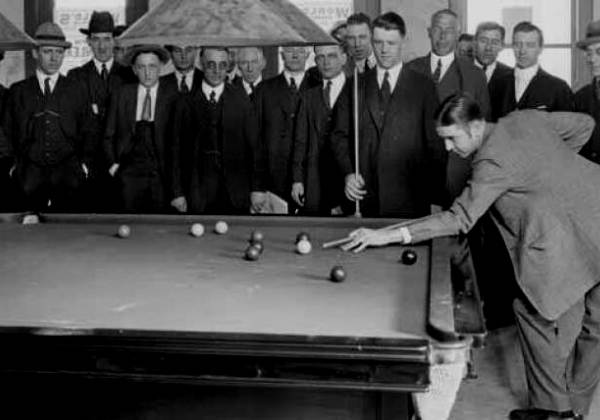 American professional pool and carom billiards player Ralph Greenleaf has earned praise as the most dominant pool player in his heydays. And he earned that fame due to his ability and charisma. He now holds second place in our list of best pool players of all time.

The New York Times, in his obituary in March 1950, stated, “What Babe Ruth did for baseball, Dempsey did for fighting, Tilden did for tennis...Greenleaf did for pocket billiards.”

Greenleaf won the World Pocket Billiards Championship a record twenty times. He mainly contested in the game of straight pool, which varied in format from contest to contest during his days.

He became one of the first three inaugural inductees in the Billiard Congress of America’s Hall of Fame in 1966. Billiards Digest Magazine placed him in the third place on their list of “50 Greatest Players of the Century”.

He earned fame as a top-class player in his native country during the 80s. Efren then moved to the U.S. for hustling, after which he won $80,000 in a week. Efren became the first Asian inductee in the Billiard Congress of America’s Hall of Fame in 2003. Pool & Billiard Magazine placed him in the second position in the poll of “Fans’ Top 20 Favorite Players” in 2007.

Pool players are treated with the utmost respect because of their skill, precision, focus, and patience, all of which are crucial qualities in a person for him to become a good pool player. But, apart from the qualities, there is also something else about pool players. They ooze elegance and finesse and have an air of refinement and poise, which are aspects associated with the port itself.

Let the editorial team know your thoughts about the best pool players of all time in the comments box below.

Q. What is the greatest shot in pool history?

Efren Reyes and Earl Strickland were in a race to 13 on June 11th, 1995. After the two teams were tied at 12-12 (or “hill-hill” if you prefer pool lingo), Reyes made one of the most amazing shots in history. This will always be remembered as one of the greatest shots ever made.

Q. How do you identify a pool hustler?

Hustlers miscue on purpose, ensuring that the ball goes where they want, thereby denying their opponents a shot. It is not uncommon for hustlers to appear overly intoxicated, stupid or incapable, but that is a facade. In order to throw your game off, hustlers might try and distract you, make you angry, or threaten you.

Q. Who is better, Reyes or Strickland?

In general, Reyes is better than Lassiter and Strickland, but not at 9 Ball. From the age of 44 to the age of 53, Lassetter won 6 World 9 Ball Championships. How many more wins would he have had if there had been 9 ball tournaments in the previous two decades?

Eight Ball Pool is an online and mobile pool simulation sports game maintained and operated by Miniclip, a games company based in Switzerland, Portugal, Italy, and England. It is widely played and got millions of players globally.