Extreme Ironing, where you need to reach extreme height or depth to do the ironing, is surely the most absurd sport of all time. From high hills to the ocean floor, players in this game reach great heights and depths to do the ironing. The Buzkashi game, which is widely played in central Asia, and the Eukonkanto game, played in Finland and Estonia, also deserve their mentions among the most absurd sports of all time.

Sports, like any other thing, have evolved through time. With the increase in the number of inventions of new sports, absurdity in the rules has also caught up. In the following list, we are going to take a look at the silliest and most illogical games and sports. Not only rules but some of these games are as irrational as they come. Here are the top 10 most absurd sports of all time.

Most Absurd Sports of All Time – 2023 Ranking

While people still are continuing to master the sports, the rules really don’t make sense in most cases of these games. If you want to know more about these games, read on… 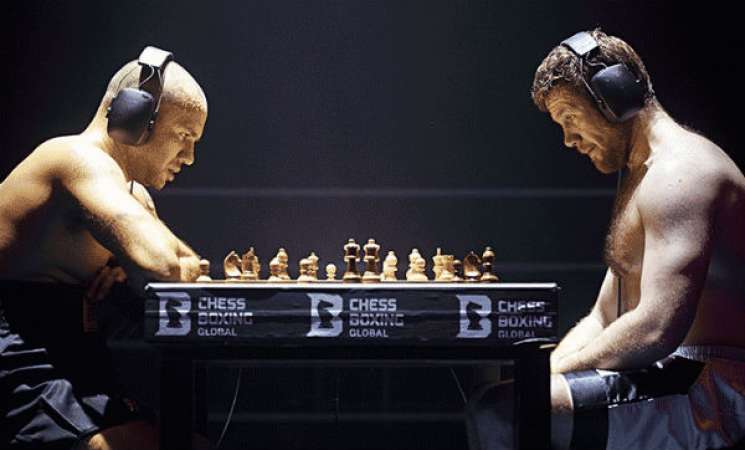 Number 10 of this list of the top 10 most absurd sports of all time is bagged by none other than chess boxing. Now, you must be relieved that this is not such a difficult or stupid game.

This game just tests your mental as well as your physical abilities to fight an opponent. But let us just warn you, this is just the beginning of the list. Chess players are considered to be calm and strong-minded.

Playing chess helps people in making better decisions and do better things. When you combine a safe game with a violent one, mayhem happens. The switch between a calm and ferocious mentality within seconds is very challenging to overcome. 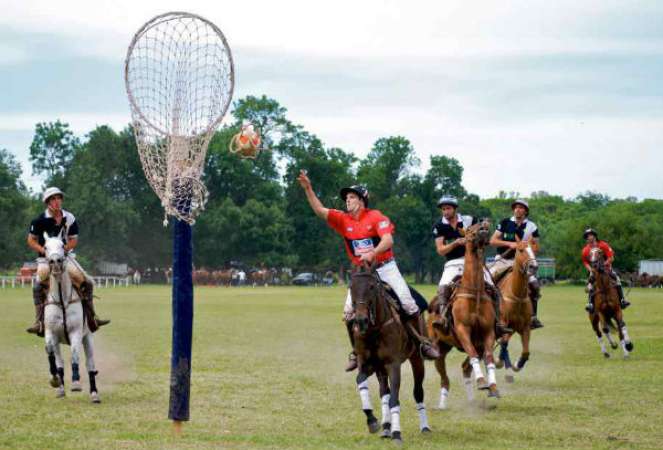 At number 9 of the top 10 most absurd sports of all time, we are looking at Pato. This Argentinian game was afflicted by violence in its early years and was played with a duck.

This game is a combination sport of basketball and polo. Well, by the looks of it, it has gotten safer, but the rules of this game are still absurd.

The players stay in deep danger of then being ripped from their saddles. There are some more dangerous sports like this one on this list as well. 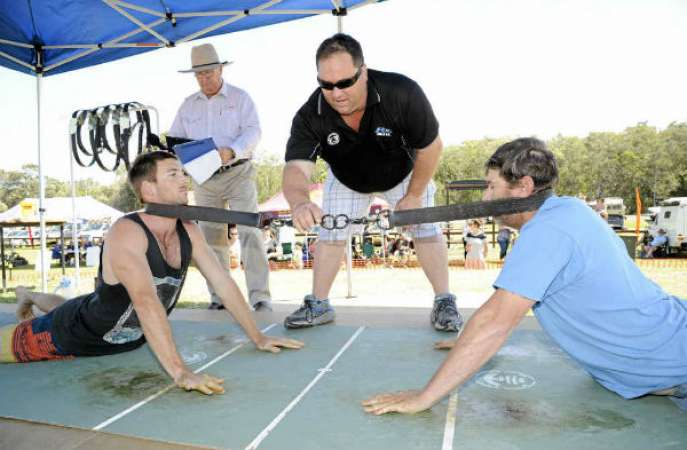 Speaking of the top 10 most absurd sports of all time, at number 8, we have Goanna Pulling. Two people are tied together with a headband kind of chain, and in order to win, they must pull.

This game is very much like a tug of war, but instead of hands and rope, it is just head and headband – chains. The one to give up the grip first obviously loses.

Goanna pulling is really famous and popular around Australia. People can’t just play normal tug of war because this game sounds like a lot of pain in the head and the neck. 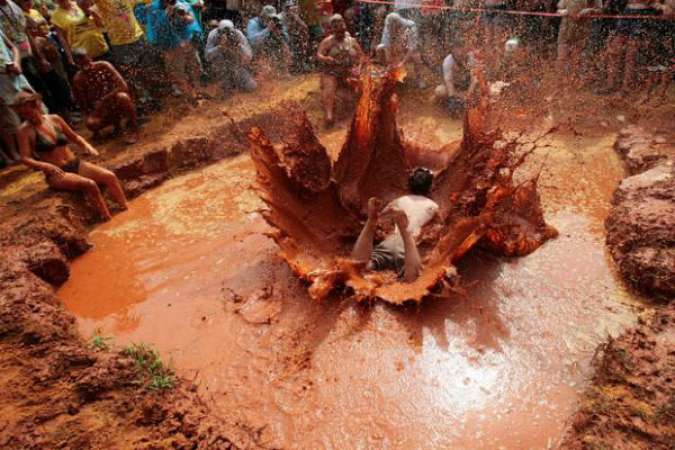 The 7th position in the top 10 most absurd sports of all time is bagged by Redneck Games. While we are talking about the absurdity in sports, how can the USA  lag behind?

The country comes first in everything and might as well come first in absurdity as well. This one right here is a gift pack of the absurd games with a ribbon on top.

The Summer Redneck Games are a variation of the Olympics but with games like toilet seat throwing, cigarette flipping, and dumpster diving. Sounds very athletic, doesn’t it? 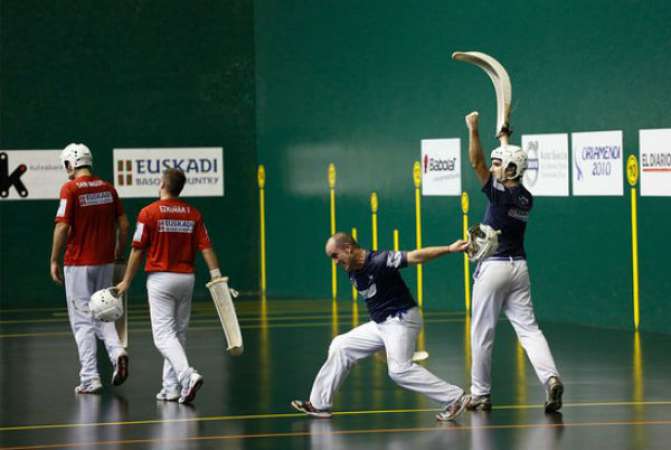 This game lands at number 6 in this list of the top 10 most absurd sports of all time. Jai Alai is just like playing racquetball. Have you ever played racquetball? Now, just imagine that the ball is coming at you at a speed of 188 miles per hour.

There you go; this is when you know that you are way past racquetball and have entered the Jai Alai zone. The speed at which this game is played is almost double as fast as one has driven a car.

And due to that, many often dubbed this game one of the most dangerous games of all time. The really silly thing about this game is that there is nothing new about it apart from the notched-up adrenaline rush and the speed. 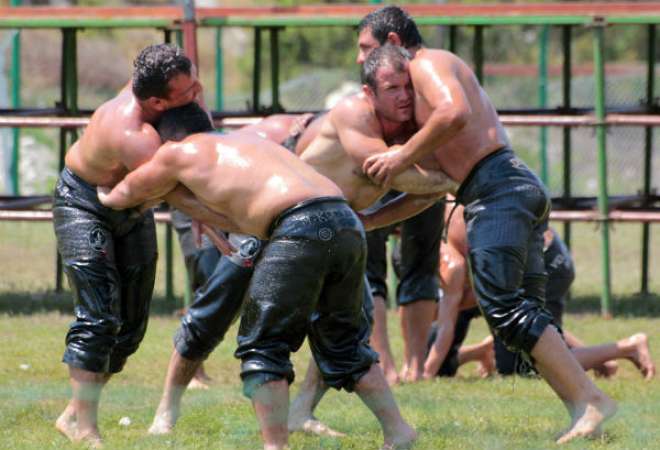 At number 5 in this list of the top 10 most absurd sports of all time, we are looking at Yagli Gures. This sport is famous around Turkey and the Balkans. All this game requires the players to do is get almost naked and wrestle.

No, not normal wrestling…. that is boring. The players have to be drenched in olive oil and then wrestle with each other. The oil serves as an advantage as well as a disadvantage for both players.

It is a kind of poetic justice if you say so. This game has been going on since 1357, and it has the record for being the longest-officially-running sport to date. 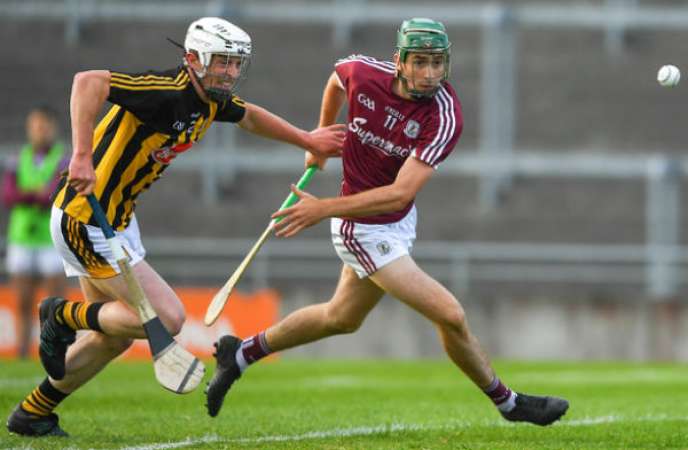 Number 4th position of the top 10 most absurd sports of all time is bagged by Hurling. This game is part hockey, part lacrosse, and part soccer. Combination games have always been a pain.

As if soccer, lacrosse, and hockey were not good enough as individual sports. The game might sound straightforward, but there is a whole lot coming your way; hold on.

The real deal with this game is that zero paddings are worn while playing hurling. Also, helmets were not mandatory until the year 2010. This is still okay, right? Well, think about that when you are hitting a ball going at 100 mph (without any padding or helmet). 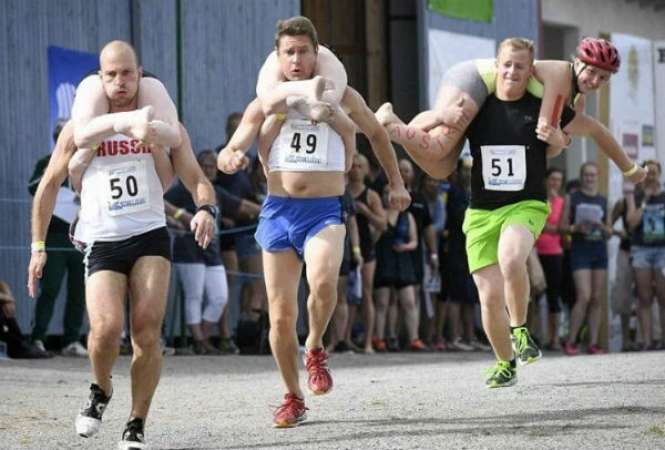 In the 3rd position of the top 10 most absurd sports of all time, we have Eukonkanto. This one is a funny game and is famous around Finland as well as Estonia.

First of all, let us tell you that this is a couple’s game. It might sound like it is a vacation fun time game, but, nope … it is a competitive sport, and winners get their rewards in terms of beer. How much fun can this game get?

The only way to win is for the husband to carry the wife on his back and cross obstacles. Easy peasy …right? Taisto Miettinen and Kristiina Happened have won this race for the past five years. Looks like some people are dedicated enough to be consistent. 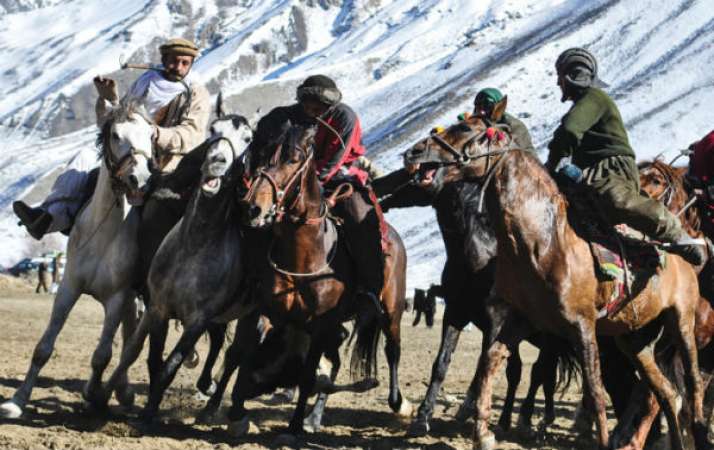 The second most absurd game to be on this list of the top 10 most absurd sports of all time is Buzkashi. This game is popular around Afghanistan as well as parts of central Asia. This game is not only absurd but also very gory and gruesome.

The rule of this game is simple, players have to play polo …but instead of sports gear, the playing material is a headless corpse of a dead goat.

The pathetic thing about this game is that it can go on for a couple of days or even a week at a stretch. At this point, players even try to kill each other in order to survive and win. 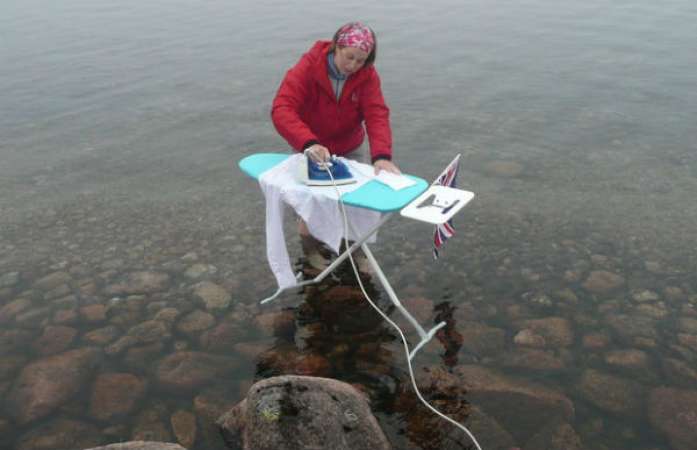 Drumrolls for the number most absurd game to date, please. Yes, the game is played exactly the way it is spelled. At number 1 in the top 10 most absurd sports of all time, we have this amazingly illogical game.

Besides, it is also one of the most extreme sports in the world. The premise of the game is to reach extreme heights and depths and iron. If this was not funny enough, let us put it out there that players have been creating world records for this.

From ironing under the sea bed to ironing at the top of the hill, extreme ironing has seen everything. It is still unknown how this insane game became popular, but one thing is for sure, and that is this sport is nowhere near logical. If it becomes part of the Olympics, it will be one of the dumb Olympic sports.

And now, we hope that you liked our list of the top 10 most absurd sports of all time. Don’t forget to send us your opinion about this list in the comment box below.

FAQs Regarding Most Absurd Sports

Q. What is the stupidest Olympic sport?

Apparently, the swimmers were supposed to move in time with the music. Not only is solo synchronized swimming the weirdest Olympic event of all time, but it is also the stupidest. By a wide margin.

Q. Is sports a human right?

Absolutely! The Olympic spirit calls for mutual understanding, friendship, solidarity, fair play, and no discrimination of any kind. Everyone must be able to practice sports without fear of discrimination.

Q. What is gender inequality in sports?

Women earn less than men in all careers, including sports. In basketball, golf, soccer, baseball, and tennis, male athletes made 15 percent to 100 percent more than female athletes.

Q. What sport has the most injuries?

It’s basketball. Statistics from 2019 show that basketball causes more injuries than any other team sport. Youth and adults who play basketball are at risk for fractures, facial injuries, deep thigh bruising, ankle sprains, and knee injuries.