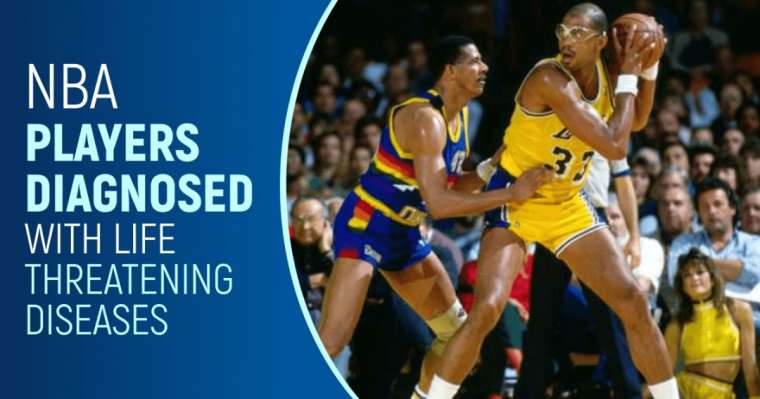 Sports stars are noticed by the world for their great fitness. It is part of their job to have great body fitness and well-maintained health, through regular exercises, selected food intake, and a set routine. It is important for them to be in a healthy state of body and mind. One can only imagine that the athletes who are so conscious about their health and body shape must be able to evade a number of illnesses that can otherwise affect people who are negligent towards their health. We have set the list of 10 NBA players diagnosed with life-threatening diseases.

But, it cannot be forgotten that athletes are mere mortals, and it is not in their hands to control all illnesses. Some athletes get affected by some life-threatening diseases. Sometimes, these happen due to some wrong step or negligence, like an injury or catching HIV, and sometimes, it is sheer bad luck. Let us take a look at 10 NBA players diagnosed with life-threatening diseases. American professional basketball player Eddy Anthony Curry, Jr. plays as a center and is currently listed with 7 feet height and 295 lb. weight. He was a member of the Miami Heat in the 2011–12 NBA season and was also a part of the Heat’s 2012 championship team.

Curry then went to play for the Dallas Mavericks in the early part of the 2012–13 season and later moved to the Zhejiang Golden Bulls of the Chinese Basketball Association the same year. He was diagnosed with hypertrophic cardiomyopathy.

While most of the cardiologists cleared him to play, a world-renowned specialist in hypertrophic cardiomyopathy Dr. Barry Maron suggested he should undergo a DNA test.

His team offered him if he took and failed the genetic test an annuity of $400,000 per year for the 50 years. But in reality, Curry never took the test and relies on the clearances from other experts. American college basketball star Eric “Hank” Gathers played for Loyola Marymount University and is widely remembered as he collapsed and died during a basketball game.

He is the second only player in NCAA Division I history to lead in scoring and rebounding in the same season. Gathers collapsed on the ground during an LMU home game against UC Santa Barbara at the free-throw line on December 9, 1989.

He was immediately diagnosed to have an abnormal heartbeat called exercise-induced ventricular tachycardia. He again collapsed and died on the ground in the first half of the WCC tournament semifinal game against the Portland Pilots on Sunday, March 4, 1990.

An autopsy later revealed that he was suffered from a heart-muscle disorder called hypertrophic cardiomyopathy. Fans still remember him as one of the greatest NBA players diagnosed with life-threatening diseases. Besides, Time also named him as one of the 100 most influential people in the world in May 2006. Nash also received the Order of Canada in 2007. Later, he received an honorary doctorate of Law from the University of Victoria in 2008.

He is suffering from a medical condition called spondylolisthesis which causes muscle tightness and excessive back pain.

For that medical issue, he mostly lies on his back rather than sitting on the bench when he is not in the game to keep his muscles from stiffening. Wilcox was first drafted by the Los Angeles Clippers in 2002 and later traded to the Seattle SuperSonics in exchange for Vladimir Radmanovic on February 14, 2006.

Celtics waived him after Doctors diagnosed him with a heart irregularity on March 23, 2012. After a brief schedule of treatment, he was later cleared to play.

Chris Wilcox then re-signed with the Celtics on July 14, 2012. Wilcox, without any doubt, deserves his place among the best NBA players diagnosed with life-threatening diseases. Retired American professional basketball player Sean Michael Elliott played as a small forward in both the college and professional teams. He achieved All-American twice during his days with the University of Arizona.

He announced that he requires a kidney transplant after his diagnosis of focal segmental glomerulosclerosis. Elliott received a kidney from his older brother, Noel on August 16, 1999. He became the first player ever to return to professional basketball after a kidney transplant on March 13, 2000.

And, he made his return in a game with the Atlanta Hawks. Known as one of the NBA players diagnosed with life-threatening diseases, Elliott still holds his place as one of the bests of the NBA. Brazilian professional basketball player Nenê currently plays for the Washington Wizards in the National Basketball Association. He was born as Maybyner Rodney Hilário but officially changed his name to Nenê in 2003.

He achieved international attention during his appearance as a member of the Brazilian national team at the 2001 Goodwill Games. Besides his career with the Washington Wizards, Nenê also played for the Brazilian club Vasco da Gama.

Nenê released a statement about him taking an indefinite leave to take care of a personal medical issue on January 11, 2008. He had his testicular tumor removed at a Denver hospital on January 14, 2008. Nenê resumed his active basketball career later.

He later entered the game with 1:17 left in the fourth quarter to a standing ovation on March 27, 2008. He surely deserves his place among the greatest NBA players diagnosed with life-threatening diseases. He later achieved the NBA Defensive Player of the Year Award twice. Besides, he has also earned an NBA All-Defensive Team nomination during his professional basketball career.

Mourning later received a kidney from his cousin and a retired U. S. Marine, Jason Cooper on December 19, 2003. This legendary player also deserves his place among the best NBA players diagnosed with life-threatening diseases. American professional basketball player Wayman Lawrence Tisdale was also a smooth jazz bass guitarist besides his active career in the National Basketball League. He has earned the title of All-American at the University of Oklahoma three times.

Besides, he also became an inductee in the National Collegiate Basketball Hall of Fame in 2009. Tisdale played for the University of Oklahoma from 1983 to 1985. He has achieved the Big Eight Conference Player of the Year award three times during that time.

Doctors diagnosed him with cancer in his knee called osteosarcoma after he fell down a flight of stairs in his home and broke his leg on February 8, 2007. He went through a right leg amputation because of his bone cancer in August 2008.

Tisdale died after his wife had taken him suffering from breathing problems to St. John Medical Center in Tulsa on May 15, 2009. He has earned his place among the best NBA players diagnosed with life-threatening diseases. He has also received his place in twelve All-Star games. Johnson achieved the All-NBA First and Second Team nominations ten times during his active playing career. He got to know about his condition of HIV after a physical before the 1991–92 NBA season.

Johnson publicly announced his immediate retirement from active basketball at a press conference held on November 7, 1991. His announcement of being HIV positive became a major news story in the United States at that time.

The declaration scenario of Johnson was the seventh most memorable moment of the past 25 years according to ESPN in 2004. One of the greatest NBA players, Johnson, deserves his place among the best NBA players diagnosed with life-threatening diseases. Retired American professional basketball player Kareem Abdul-Jabbar spent 20 seasons in the National Basketball Association as a key player of the Milwaukee Bucks and Los Angeles Lakers. He played in the center position and has won the NBA Most Valuable Player Award six times.

Jabbar has earned his place in the NBA All-Star 19 times and became an NBA All-Defensive Team member 11 times. He has held the all-time leader position in points scored and field goals made at the time of his retirement in 1989.

Jabbar announced in November 2009 that he was suffering from cancer of the blood and bone marrow called Philadelphia chromosome-positive chronic myeloid leukemia. Jabbar’s leukemia was actually diagnosed in December 2008.

He also declared that his disease could be controlled by taking oral medication daily. This one of the richest NBA players of all time definitely deserves his place among the greatest NBA players diagnosed with life-threatening diseases.

When the world learns of the fact that some of the most favorite players have been diagnosed with deadly diseases, it breaks their hearts. They pray, and when some of the players come out victorious from the battle against the lethal diseases, it is a reason to celebrate. Unfortunately, not all athletes are as lucky, and many of them lose it, leaving the memories of their best moments in the history of sports.

So what’s your take on the list of 10 NBA Players Diagnosed with Life-Threatening Diseases. Let us know in the comments section below.

Isaiah Austin is living out his dream as part of the NBA, despite being diagnosed with Marfan syndrome. His NBA career officially started in 2014. Isaiah Austin, who stands 7-foot-1 and resembles Kevin Durant, dreamed of being in the NBA as a child.

Q. What disease does Larry Bird have?

An enlarged heart in Bird resulted in atrial fibrillation, which occurs when electrical signals are generated chaotically throughout the upper chambers of the heart.

Q. Has anyone ever died while playing in the NBA?

Four young athletes, aged 16 to 20, died shortly after collapsing while playing basketball. Three of them had shown no cardiac abnormality in their preparticipation screening.

Turpin worked as a security guard during the 2000s. As a result of an apparent self-inflicted gunshot wound, he committed suicide in his Lexington home on July 8, 2010. His motive remains unknown. Additionally, it was not revealed if he left a suicide note.