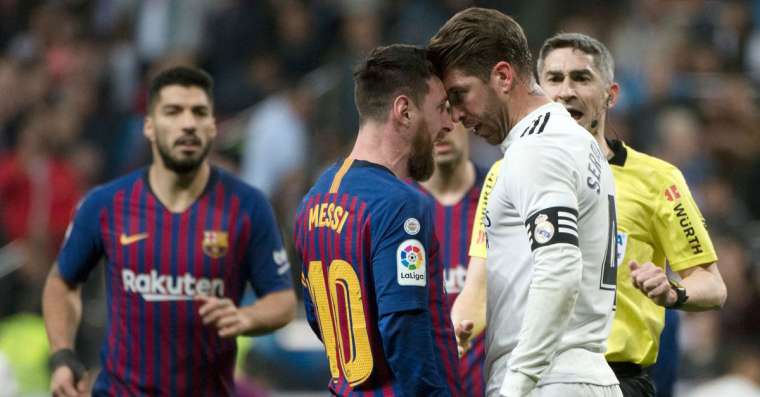 Rather than improving over time, the relationship between the two clubs, Real Madrid and Barcelona, has worsened, as they have become more dominant than ever in the 21st century. Rewinding back over the years, though, here are the best El Clasico moments of all time.

El Clásico is the football match played between rivals and two of the richest football clubs, Real Madrid C.F. and F.C. Barcelona. It is the biggest football club game in the world and is among the most viewed annual sports events. With the intensity in mind, it’s not hard to understand why there have been so many thunderous editions of El Clasico through the years.

One of the best El Classico moments was the controversy in Spanish football in the aftermath of World War II was the transfer to Alfredo Di Stéfano from the Argentine club Millonarios to one of Barcelona or Real Madrid.

The summer of 1953 saw different entities with different agendas including the clubs, FIFA, and the Spanish Federation get involved in the transfer tussle between the two Spanish giants.

Fed up with the Madrid-based government getting involved, Barcelona withdrew its attempts to sign the Argentinian. Two weeks later he made his El Clasico debut, Real won 5-0, he scored four.

Another of the best El Clasico moments of the vintage era was the transfer of Johan Cruyff. As Barcelona stalled over the signing of Ajax’s superstar, not very dissimilar to the Di Stefano saga as Real wanted to get involved in this transfer.

But Cruyff chose Barca over Real and to add salt to injury he said he would never play for a team “associated with Franco” directed by General Franco. What followed in the Clasico was a 5-0 drubbing with Cruyff bagging 3 assists and a goal.

It was the time of the famed Dream team of Johan Cruyff at Barcelona. Boasting of a lineup with Romario, Guardiola, Stoichkov, and Laudrup, Barcelona dismantled Real with Romario netting a Hat-trick & Koeman with a free-kick.

This incident is now dubbed as one of the top 10 best football moments in El Clasico.

In the summer following the 5-0 win against Real Madrid, Michael Laudrup controversially departed for the Spanish capital, after the player had a monumental falling out with manager Johan Cruyff.

There were rumors that Laudrup joined Real to have revenge on Barcelona. Although Laudrup denied this, no one could argue that his transfer sealed the wildest momentum swing between these two clubs.

In the last decade and a half, one of the best El Clasico moments was the then-world record transfer of the Portuguese great, Luis Figo from Barcelona to Real Madrid in the summer of 2000.

Figo had been held up as the pride of Barcelona, but all that love turned into hatred the moment he was on his way to Madrid to be a part of Real’s Galactico project. The expression of this hatred reached an all-time high at the Nou Camp in November 2002.

Often dubbed as the Derby of Shame, Figo met a blood-thirsty mob that day. When he went to take a corner kick, the Portuguese winger received beer cans, cigarette lighters, whiskey bottles the most significant among them was a suckling pig’s head which was hurled at him. The match ended goallessly. Had Figo contributed a goal he might not have made it alive to Bernabeu.

Probably one of the best El Clasico moments, that was what happened when Ronaldinho picked apart Los Blancos in 2005. It was the Brazilian who took over after the break. His skills were sweet & sublime. Ronaldinho finished a mesmeric run from the halfway line with a cool finish past one of the best football goalkeepers, Casillas.

And then, thousands of Real fans in the Bernabéu rose to their feet to show their appreciation of a sublime performance by the Brazilian superstar.

4. Starting With The Messi Era – Greatest Moments in Soccer History

Probably the youngest player to score a hat-trick in El Clasico, Lionel Messi scored his first hat-trick against Real Madrid that too at the tender age of 19!

The match ended in a 3-3 draw with Messi rescuing Barcelona who came to know the worth of this young incredible talent who later turned out to be the world’s greatest player of the Modern-day era.

The introduction of one of the greatest football players of all time, Lionel Messi, definitely deserves its place among the best El Clasico moments of all time.

Probably the biggest margin defeat in an El Clasico, Braces from Henry and Messi, as well as goals from Puyol and Pique illustrated the gulf in class that had grown between the two teams.

It also accelerated the dawn of the second Galactico era at Real Madrid, as they sought to challenge the dominance of the Catalan club.

The 2011 Champions League semifinal between Real and Barcelona was an extremely intense time in the rivalry, with Pep Guardiola and Jose Mourinho playing central roles in the two fixtures.

Two late goals from one of the greatest footballers of all time, Messi, at the Bernabeu put Barca into the final before Madrid even departed for Catalunya.

In the return leg, Marcelo leveled the match after Pedro had given the home side the lead. Barca went on to beat Manchester United in the final, while Los Blancos left their La Decima dream.

When Ronaldo remained in the stands due to injury, Gareth Bale showed his heroics. With five minutes to go, Gareth Bale picked the ball up inside his own half on the left-wing.

He went past Bartra with his heroic acceleration before running into the penalty area. Bale then slotted the ball left-footed past the goalkeeper from six yards out.

Throughout the years, El Clasico has always been a cherish to watch. It has gifted us with so many wonderful moments. In recent years, the rivalry has been”encapsulated” by the rivalry between Cristiano Ronaldo and Lionel Messi. This concludes the Top 10 Best El Classico moments.