Baseball is a popular outdoor sport played by people all around the world and is the national sport of Cuba, but it is more common in Canada and US in warm weather. Moreover, two opposing teams, each of nine people, play this game on a diamond-shaped field. And a good batting average in baseball is absolutely needed to overthrow opponents.

A player from one team balls at a player from the other team who has to hit the ball with a bat; once the ball has been hit, the batter has to run through the field and can only stop at three base points.

On reaching each base, the batter scores a hit, and when the cycle is completed, the batter achieves a home run. While the batter runs between the bases, he can be caught by the fielders of the opposite team and can lose the chance of scoring hits.

Therefore, it is crucial to see the baseball player’s batting performance through his previously played matches.

In this article, we will get an idea of the term batting average, a statistical value used to determine a player’s success throughout his career in baseball. It gives an idea of hits scored by the player over several at-bats. 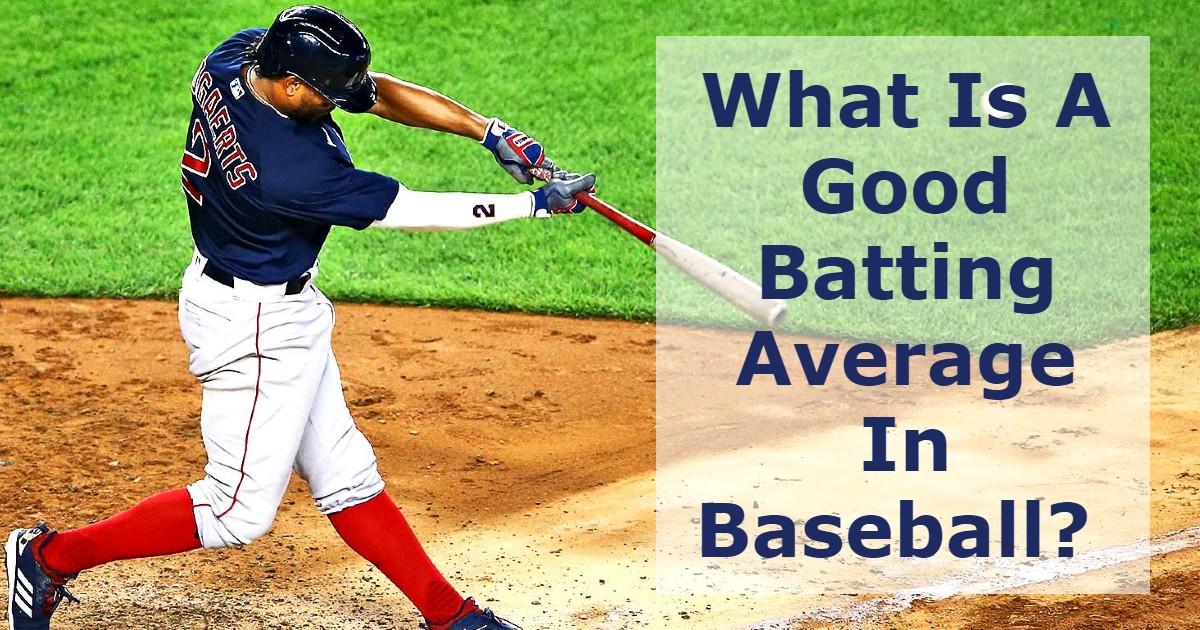 What Roles Do Players Play In Both Teams?

In baseball, there are two teams, out of which one team plays defense and the other plays batting, with the reversal of these roles after nine innings.

The team who plays defense has to ball to a player from the opposite team and then try to get the player out when he runs for a home run.

Likewise, the team who plays batting has to hit the ball and run around the diamond-shaped field without getting caught, and after finishing the cycle, a home run is scored.

What Is The Batting Average?

Batting average is a term used to describe the batting ability of a player and the chances of achieving hits by the batsman. It is used to get an idea of the batsman’s previous hits and the odds of making home runs. It is a statistical value that holds great significance and utilization yet has certain drawbacks.

Systematically, it is a ratio of two terms commonly known by baseball players and fans, the number of hits and the number of at-bats. It is an average number, and the batsman can perform either better or worse than his batting average.

In this fraction, the number of hits comes in the numerator, and the at-bats come in the denominator.

Please note that a good background knowledge of at-bats and the number of hits is required to understand the batting average better.

What Is Meant By Hits In Baseball?

In baseball, the hit is a score awarded to the batter when he reaches the first base from the initiating point without getting caught by the fielder. The fielder can see the batter while he is on the way to the base in three ways, he can directly tag the batter with the ball.

In addition, he can protect the base by throwing the ball to the fielder on the base, or he can go to the base with the ball in his hand.

Likewise, double and triple hits are scored when he successfully reaches the second and third bases. When the player completes the cycle, he scores the home run.

What Is Meant By At-Bats In Baseball?

In contrast to at-bat, there is a term plate appearance, which refers to all batting cases irrespective of any error or sacrifice fly. Sacrifice fly means the ball flies out of the territory, and the batter receives a run.

How Is The Batting Average Calculated?

Finding a baseball player’s batting average is quite simple; you only need to know two variables by which you can assess the player’s record. The batting average is calculated by finding the batter’s number of hits and at-bats and then dividing the former by the latter.

The answer can be any decimal between 0 and 1 and is then rounded off to the third decimal place.

How Much Is Batting Average Considered Good?

It is essential to note that a batting average above 0.400 is extremely difficult to achieve, and only a few players can achieve it.

A batting average below 0.250 is considered good, and if it comes out below 0.200, it is termed poor. A player’s performance can be determined by assessing the values of this mathematical number.

When Was The Batting Average Introduced Into Statistics?

Henry Chadwick, a statistician, introduced the term batting average in 1887 to judge the players’ success and average number of hits during their careers.

What Is The Significance Of The Batting Average?

The significance of the batting average is reflected by the fact that it is used to assess a player’s history of success throughout his career. It is utilized to get an idea of the player’s performance and how often the player gets hits and makes runs.

In addition to that, it is also used to guess the probability of hits by the player based on his previous records. A batting average is considered a significant factor in grading the players based on their performance and last successful hits, regardless of how they were achieved.

What Are The Shortcomings Of The Batting Average?

The batting average is a handy statistic in determining a player’s performing abilities and has importance and significance in the game. However, this statistic value has a significant shortcoming; it only includes hits achieved by running to the base.

Also, it does not consider the hits got by walk nor includes hits received via high pitches. Walk means the baller balls four pitches not struck by the batter, and the batter gets a hit in return. It reduces the number of hits because the walk hits and high-pitched hits are not included in the total.

When the batting average was introduced, the walk hits were included in the total number of hits in the first season, but from the next season onwards, they were excluded from the total score.

The number of hits in the batting average does not indicate if the hits are single, double, triple, or home runs.

So if one player has achieved 60 single hits and the other has achieved 20 singles, 20 doubles, and 20 home runs, both players will have the same number of hits and batting average. This results in a false assessment of the success and cannot be relied on for accurate performance grading.

The best batting average scores of the top baseball players are as follows:

As every game has some famous best players, baseball also has its top players, but the question arises of how the assessment of baseball players is done.

The judgment of the success of baseball players is made by a statistical value known as batting average, which is obtained by dividing the total number of hits by the player by the at-bats.

A number is obtained as an answer which is used to judge the performance of the player and assess the odds of future hits by him. As every statistical value has drawbacks, so does batting average, but at the same time, it has its significance which masks the flaws. 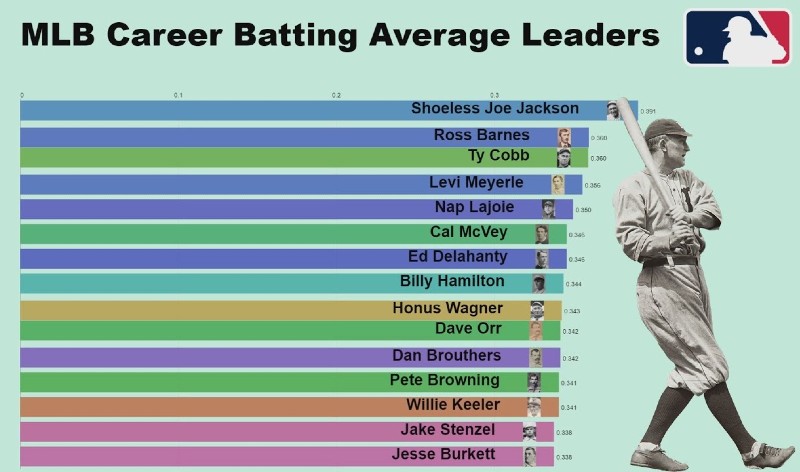 Q. Which terms are included in the batting average?

The batting average is a ratio of two terms, the number of hits and the at-bats, and is a decimal number ranging from 0 to 1.

Q. What is a good batting average?

Q. Who has achieved the highest batting average in the history of baseball?

The highest batting average in baseball history is 0.366, achieved by Ty Cobb, an American baseball player.