Stadiums are the centerpiece of any sporting event, starting from ancient times till the modern days. From the Greek period when the Olympics was first established to entertain a huge crowd until the recent days’ events of the Olympics, which were broadcasted worldwide, the stadiums are always the center of attraction. And still, there are several oldest stadiums around the world that catch our attention.

The word “Stadium” was derived from the Greek word “stadion” which is a measure of length equaling the length of 600 human feet according to ancient Greek scriptures. And, there are several oldest stadiums that still exist in their full glory.

As the current unit of measurement, 1 station stands for 600 feet or 180 meters where the length of a human step is considered 1 foot. It may also signify a length up to 15% larger or smaller than the modern unit, according to various ancient scriptures.

The Romans had similar measurements, but about 607 feet or 185 meters as it was described to be a distance of 125 passi or double-paces. There are many stadiums that are developed in modern times, but there are also many which were neglected irrespective of their antiquity. And here is the list of the 10 oldest stadiums around the globe. Bramall Lane stadium is the oldest stadium in the world still to be hosting national and international football matches. Located in Sheffield, South Yorkshire, England, the Sheffield United football club still calls it their home.

Bramall Lane Stadium is the only stadium besides The Oval which has hosted England international football matches, an England cricket test match, and one of the most popular football leagues, the FA Cup Final.

The stadium got its name after the file and graver manufacturers Bramall family. Besides cricket and football, Bramall Lane Stadium has also hosted rugby league games for the Sheffield Eagles, and a pair of rock concerts in 1988 by Bruce Springsteen. Constructed in 1855, this stadium has a current seating capacity of 32,702. 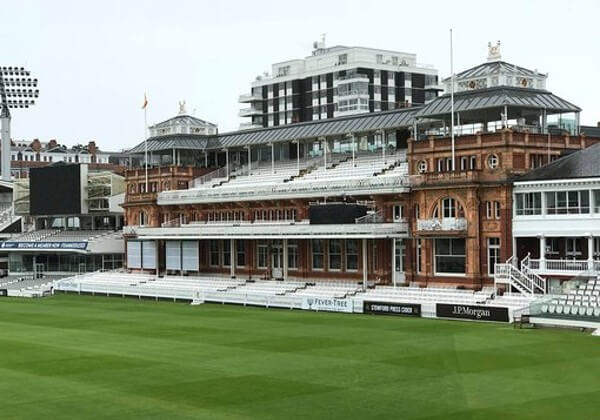 Still now, the England and Wales Cricket Board, the European Cricket Council, and the Middlesex County Cricket Club call this stadium their home.

It was also the home of the International Cricket Council until August 2005. The stadium hosted a friendly match between Marylebone Cricket Club XI captained by Sachin Tendulkar and the Rest of the World XI led by Shane Warne to celebrate its two-hundredth anniversary on 5th July 2014. Located in Kennington, in the London Borough of Lambeth, South London, the Oval started hosting cricket matches in 1845. Surrey County Cricket Club calls it their home since the official inauguration of this stadium. Besides, it is also one of the biggest cricket stadiums in the world. Opened officially to the public on 28 April 1877, this stadium has a current seating capacity of 41,798. The stadium has the highest official attendance of 82,905 on 12 October 1935 in a league match between Chelsea and Arsenal. 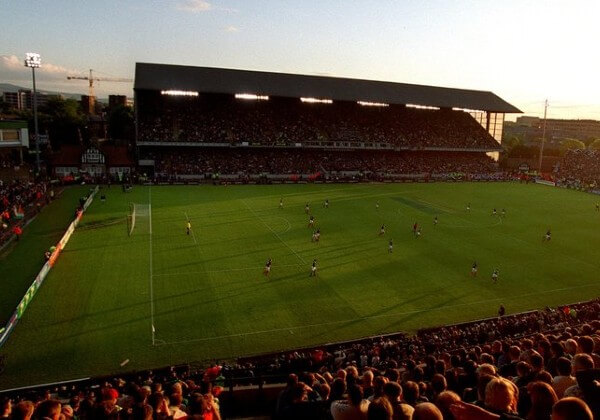 Primarily used for rugby union and for association football matches, authorities demolished the Lansdowne Road Stadium in 2007. The new Aviva Stadium stadium now stands in that place, opened in 2010 for the public.

Located in the neighborhood of Ballsbridge in the city’s Dublin, the Irish Rugby Football Union actually owned the Lansdowne Road Stadium. The stadium opened its gate for the public in 1872 and last had a seating capacity of 48,000.

It was the creation of Henry Wallace Doveton Dunlop who was the organizer of the first All-Ireland Athletics Championships and also the founder of Lansdowne Football Club in 1872. Besides hosting active sports, Lansdowne Road Stadium also hosted musical concerts by Michael Jackson, Robbie Williams, U2, and several other music legends. Anfield Stadium is the seventh-largest football stadium in England and is located in Anfield, Liverpool, England. It was originally the home of Everton F.C. between 1884 and 1891 and has been the home of Liverpool F.C. since they established in 1892.

After Anfield Stadium was converted to an all-seater stadium in 1994, it currently has a seating capacity of 45,276. This stadium holds the record of the highest number of attendance of 61,905 on 2 February 1952 in a match between Liverpool and Wolverhampton Wanderers. 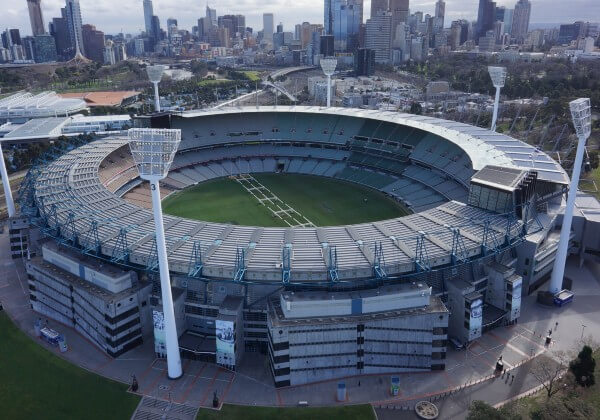 Melbourne Cricket Ground is located in Yarra Park, Melbourne, Victoria, and is a major part of the Melbourne Sports and Entertainment Precinct. This stadium hosted several matches and events of the 1956 Summer Olympics, the 1992 ICC Cricket World Cup, and the 2006 Commonwealth Games.

Melbourne Cricket Ground also hosts a popular Boxing Day Test match on 26 December each year. Established in 1853, this stadium currently has a huge seating capacity of 100,024. The Old Trafford Football Stadium is the second-largest football stadium in the United Kingdom. Located in Greater Manchester, England, the Manchester United FC calls this stadium their home since its inauguration.

It is also the ninth-largest stadium in Europe with its seating capacity of 75,635. Old Trafford hosted several matches of the 1966 FIFA World Cup and UEFA Euro 96 and hosted the final of the 2003 Champions League.

This stadium hosts Super League Grand Final each year and already twice hosted the final matches of the Rugby League World Cups. Old Trafford was also the main stadium of the 2012 London Olympics. Officially opened for the public on 19 February 1910, the legendary Architect Archibald Leitch actually constructed this world-famous stadium. 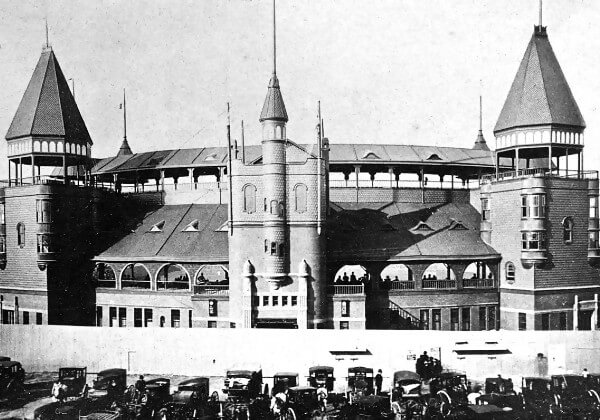 The South End Grounds were a group of three baseball stadiums in Boston, Massachusetts. American baseball club Boston Braves used this stadium as their home ground between 1871 and 1914.

The club regularly participated in the National League and the National Association during its heydays. Due to its design similarity with Polo Grounds, fans often used to say that the south end Ground only had a center field but didn’t have a right or left the field.

But sadly, the infamous ‘Great Roxbury Fire‘ completely destroyed the ground on 15th May 1894. After a further reconstruction, the stadium again reopened its door for the final time on 20th July 1894. It used to have a capacity of 6,800 and had a grass surface. The White City Stadium has earned its reputation for being the precursor to the modern seater stadium since its inauguration. Actually built for the 1908 Summer Olympics, the stadium later also hosted a match at the 1966 FIFA World Cup.

This stadium used to host greyhound racing and speedway. White City Stadium was the host of the finish for the first-ever modern distance marathon and is the first Olympic Stadium in the United Kingdom.

White City Stadium was designed by engineer J. J. Webster and constructed by George Wimpey with a seating capacity of 68,000. This stadium was opened for the public on 27 April 1908 by King Edward VII.

It was also the home ground of the White City Rebels speedway team from 1976 to 1978. After its demolition in 1985, the site is now the BBC White City.

Other stadiums such as Filbert Street, constructed in 1891, and Roker Park, built in 1897, got demolished. But eventually, they left the audience and fans entertained. Many stadiums will be built in the near future, with modern technology and infrastructures. However, the heritage stadiums will remain examples of history.

So, which of the 10 oldest stadiums grab your fancy? Let us know in the comments below.

Q. Which was the first stadium?

At Shepherd’s Bush in London, the first stadium of the modern era was built for the IV Olympiad in 1908. More than 50,000 people were able to sit in the partially covered stands.

Q. Which stadium was used in unbreakable?

In his 2000 M. Night Shyamalan movie, Unbreakable Franklin Field plays a prominent role as one of the main locations. The movie’s protagonist, played by Bruce Willis, works as a security guard at a stadium.

Q. Who was the Rich stadium named after?

Q. Which was the first baseball field?

The first organized baseball game was played on June 19, 1846, at Elysian Fields, which is considered the birthplace of baseball. Alexander Joy Cartwright’s rules were used in this game between the New York Base Ball Club and the Knickerbockers.